A LIFETIME OF ACHIEVEMENTS

In 2004, a group of marketing professionals and academics saw a need to increase the contribution of the marketing function through the development of standards for marketing performance measurement and processes. The Marketing Accountability Standards Board was founded, and the leader that emerged for this new movement was Meg Blair.

Having retired from an outstanding and much-lauded career in marketing measurement, Meg seized the opportunity to increase CMO effectiveness and make the marketing field better for all. Serving as founding President and CEO, she led MASB through its first decade, creating awareness of the issues and helping establish the first of many game-changing projects, including Brand Investment & Valuation, Improving Financial Reporting, and the Common Language Marketing Dictionary.

She also recruited many marketers, measurement providers, industry associations and academics to the cause. After relinquishing her leadership role in MASB a year ago, she continued to serve as Chair of the Marketing Accountability Foundation until her unexpected, untimely passing.

Meg had a keen eye for seeing the potential in people and served as a mentor to many. While demanding as a boss, she always provided her reports the tools and knowledge needed to rise to her challenges.

As one former colleague put it, she regularly “provided motherly attention and advice without my having to ask.” Meg’s protégés now hold executive positions in leading research companies, marketer companies and business schools around the world.

David Stewart, MASB Chair and President’s Professor of Marketing and Business Law at Loyola Marymount University, reflected, “I came to know Meg in the early 1980’s while I was an assistant professor at Vanderbilt. She was a friend and mentor. Meg was one of a handful of industry leaders who understood the importance of measurement and who advanced best practices associated with the development and use of reliable and valid measures. Her contributions will live on.”

Her work over the past several decades has had a permanent, positive impact on marketing.

Breaking Through the Glass Ceiling

Meg began her career in marketing at Schwerin Research in New York City. Horace Schwerin was a pioneer in marketing research and developed several pre-airing methods of assessing television advertising impact. Meg took on the role of a human computer; tabulating test results by hand and later with a Resulta 7 mechanical calculator imported from Berlin. Through her thousands of calculations, Meg gained a fundamental understanding of how metrics worked and how best they could be used. Her attention to detail garnered her a reputation of providing accurate and timely information.

In the late 1960s, Schwerin sold his firm. When the new owners asked how their measures could achieve greater adoption, Meg raised her hand. Drawing upon the insights from her thousands of calculations, she laid out a vision for their adoption as standards and became leader of a new entity, the Advertising Research System (ARS) Group.

Leading One of the Fastest Growing Research Companies

As the young president of ARS Group, Meg moved aggressively to advance the state-of-the-art in measurement science. At that time, marketers routinely used on-air day after recall scores as the ultimate test of advertising success. Meg developed a secure, off-air related recall solution that accurately predicted these scores. The Proctor & Gamble Company quickly adopted this approach, making it an industry standard.

Meg also knew from the Schwerin days that recall was a weak indicator of sales and that the behavioral pre-post brand preference method (aka persuasion) was better. Initially failing to convince P&G to switch, Meg made the unprecedented decision to provide the ARS Persuasion scores free to build up the dataset and prove its value. Two years after making this bold move, an analysis comparing the metrics to sales results demonstrated the superiority of the measure and soon after it was adopted by P&G and others as their primary airing criteria.

From this experience, Meg took on a “give them what they want, but also provide them what they’ll need” mindset which served as the basis of a constant investment in metric innovation.

Meg was also an early devotee of system automation and the quality movement, authorizing the acquisition of a Hewlett-Packard 2000 mainframe computer. At that time, this was an unheard-of investment for a market research company. In the 1980s and 1990s, she drew on the work of Deming and others to put in place a quality management system which, among other things, incorporated routine monitoring of the reliability, validity and calibration of all metrics delivered to clients. This system approach served the firm well at the turn of the millennium as it became one of the earliest to be declared Y2K compliant. 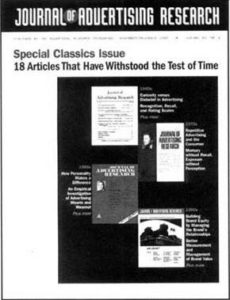 Meg placed great emphasis on “research-on-research,” consistently budgeting five percent or more of ARS Group revenue towards measurement innovation. This fueled numerous findings within the space which were regularly released as white papers and published in industry journals.

One discovery – that an ad’s effectiveness ‘wears out’ in a predictable manner as media weight is placed behind it – fostered substantial changes in the way advertising was purchased and managed. Advertisers now had the means to manage their ad inventories and plan refreshment schedules. This finding became a key underpinning of what is now known as market mix modeling. In the year 2000, the Editorial Review Board of the Journal of Advertising Research selected only 18 to merit the title of “classic” by having withstood the test of time. Meg’s 1987 study on advertising wearout is among them. 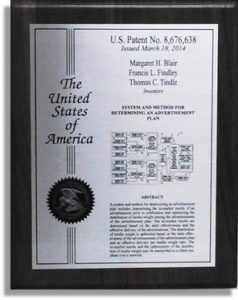 Meg did not believe in research for the sake of research. Her focus remained on using knowledge for useful business applications. Given the intangible nature of marketing, patents are rarely granted, but Meg’s application of these findings proved so ‘useful, novel, and non-obvious’ that two patents were awarded: U.S. Patent #8,160,918 for the collection of behavioral brand preference data online, and U.S. Patent #8,676,638 for empirically based ad planning. These patents are still under license and in active use.

In 2002, Quirk’s Marketing Research Review published an overview of the major copytest players. The section on ARS Group stated: “Their overall philosophical approach is that the advertising process is an investment that can be managed and should ultimately pay out in an identifiable ROI to the advertiser. Moreover, the ARS Group views itself as a ‘copy management’ partner whose goal is to help the advertiser and the agency improve the odds of success… [Their] measurement has been validated to actual business results more than any other advertising measurement in the business.”

This is a good summary of Meg’s empirical approach. To further spread this type of method both within marketing and beyond to other disciplines, she endowed the Blair Chair of Business Science at the University of Southern Indiana, where she served on the advisory board for a decade.

For her contributions to the advancement of marketing science, Meg received the Distinguished Practitioner Award from the Academy of Marketing Science in 2005 and the Lifetime Achievement Award from the Advertising Research Foundation in 2012. She was recognized as a MASB Trailblazer in 2017 for embodying the spirit of marketing accountability and being instrumental in carrying out the MASB mission.