Despite the rise of digital media and new technological developments, television remains one of the most effective platforms for advertising, but advertisers need to manage the quality of their messages and the media weight of their advertising more carefully than in the past. 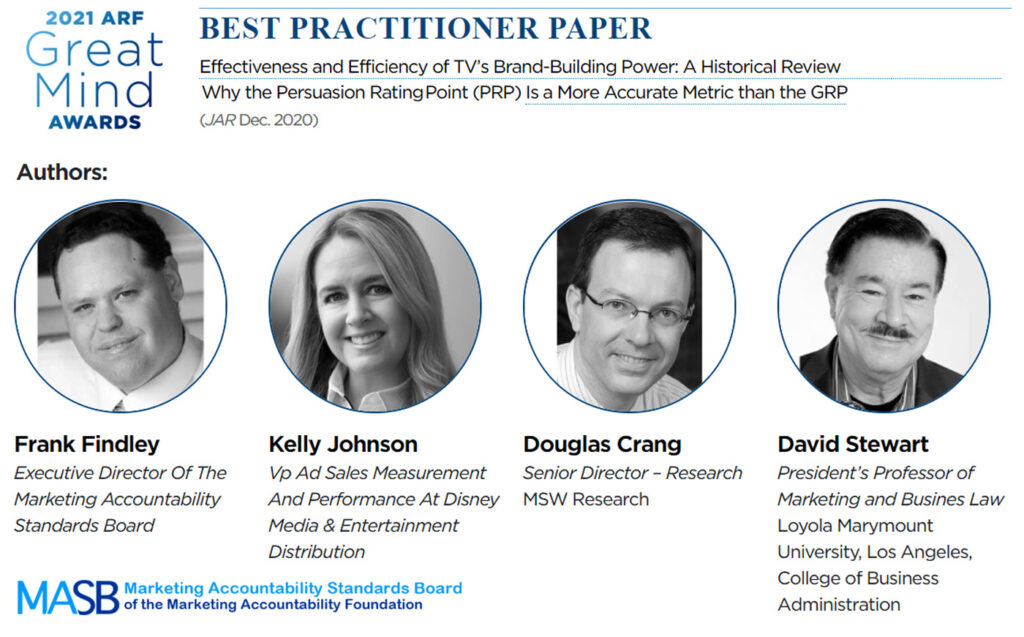 Four members of MASB, the Marketing Accountability Standards Board, reach this conclusion in the 2021 ARF Great Mind Best Practitioner Paper, Effectiveness and Efficiency of TV’s Brand-Building Power: A Historical Review Why the Persuasion Rating Point (PRP) Is a More Accurate Metric than the GRP.

This research demonstrates that the 30-second television advertisement format, when delivered via a quality exposure, is as effective today as in the 1980s. It also, however, shows that approximately 25 percent more gross rating points are needed now to deliver the same brand-building power in market, which implies that television-channel proliferation, time-shifting technology, and simultaneous digital-media consumption are having an impact on the advertising-viewing experience. This decline is mitigated, however, by a 45 percent increase in the number of households in the U.S. over the same time period.

TV remains an extraordinarily efficient medium for reaching large audiences at a time when other media are increasing in cost even as they reach smaller audiences. Its ability to influence consumers is not independent of the effectiveness and the persuasiveness of the message, however. Prudent advertisers thus will optimize the efficiency of television as an advertising medium by placing weight against the most persuasive message executions. Although this always has been good practice, the breadth of media alternatives available to advertisers today makes optimization of message persuasiveness even more important than in the past. It also means that devoting more attention to and resources for the creation and testing of alternative messages is a wise management practice.

On a single, quality exposure basis, television advertising continues to be highly effective, and the persuasion rating point (PRP) offers an accurate measure of that effectiveness.