Is television as effective as it was in the 1980s? Has its role diminished to the point of non-viability? How does it compare to other media platform options available today?  These questions are answered in the MASB white paper Television’s Brand Building Power – from GRPs to PRPs, by MASB Executive Director Frank Findley, ESPN Vice President of Advertising & Marketing Intelligence Kelly Johnson, and MSW•ARS Research Senior Director of Research Doug Crang. 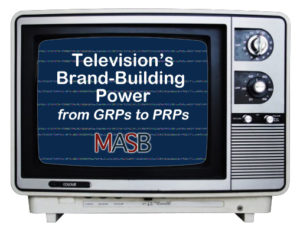 TV is still considered one of the most effective platforms for advertising, despite the rise of digital and new technological developments. The paper examines the effectiveness of television advertising and changes in audience response since the 1980s within the United States.

Extensive research shows that the 30-second television ad format, when delivered via a quality exposure, is as effective today as in the 1980s. However, it also shows that approximately 25% more GRPs are now needed to deliver the same brand-building power in-market; suggesting that television channel proliferation, time-shift technology, and simultaneous digital media consumption is impacting the ad viewing experience. This decline is mitigated by a 45% increase in the number of households in the U.S. over the same time period.

This research confirms several key principles of brand building with corresponding marketing process implications, including a conceptual shift in managing advertising based only on exposure rates to also taking into account the brand-preference-shifting power of the ad units themselves; i.e. a shift from GRPs (Gross Rating Points) to PRPs (Persuasive Rating Points).

Despite a potential increase in distracted viewing, television advertising still maintains an effective frequency profile that is practically comparable to other media channels including digital.

This paper was originally published by Warc in July 2017, but now contains additional content. For a free download, visit MASB WHITE PAPERS.